Crises as an opportunity for integration in the long-term perspective 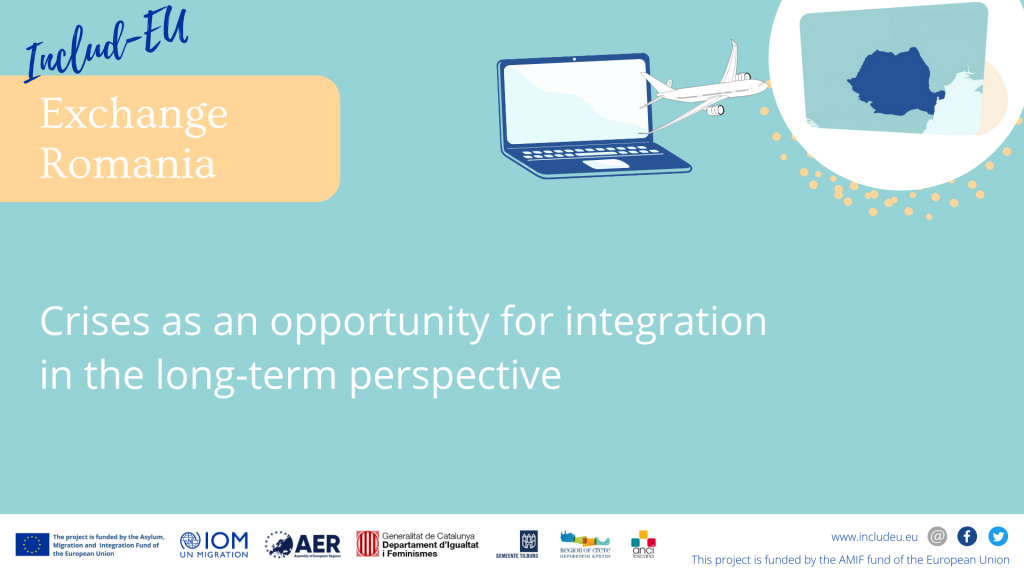 In the immediate afterwards of the Russian invasion of Ukraine, a mass influx of people fleeing the war arrived in the EU Member States (EU MS), mostly vulnerable groups such as children, women and elderly. Local authorities are first-line responders for those arriving: despite the several solidarity initiatives which were created, needs and challenges remain, especially at the local level.

Moreover, this new wave of private measures also arises new issues in terms of due diligence and coordination of those providing humanitarian and solidarity support. In light of this, and considering the many requests received by municipalities in terms of responses other local actors put in place, the Includ-EU Team organized an exchange on how to use crises as an opportunity for integration in the long-term perspective.

Discussions focused on the main needs and challenges identified by the participants to the meeting, together with the solutions proposed and further developments for the future. A presentation of IOM Romania’s actions was also included, as well as the Municipality of Bucharest, especially concerning the strategy put in place for the private sector engagement in the response to the crisis.

The meeting was opened by the representative of DG HOME who stressed their willing of hearing what is happening at the local level, and then listed all mechanisms created by the EC concerning the management and welcoming measures for those who fled Ukraine (EU Solidarity with Ukraine, aggregate figures), including the Temporary Protection Directive, which is a big achievement but is also a newly applied policy.

Mass influx of people fleeing the war entering MS were witnessed and, at the same time, also going out of them: data shall be reliable and consolidated, in order to create and base policies on. At the same time, needs are also unclear because of the unknown duration of stay of those who have arrived.

Housing was perceived as the biggest challenge by all representatives present; at the same time, another tricky issue which emerged during the discussion is the unusual ways of accommodating people compared to other groups of migrants and International Protection Holders (IPHs) considering the several initiatives providing accommodation in private homes organized, which, at the same time, could cause problems in terms of quality control and due diligence, especially considering the specific vulnerable groups involved.

Further points were raised in terms of needs and challenges, especially related to: the availability and flow of funds; psycho-social support, especially for children and those who left their sons behind; education needs and labour market inclusion; communications with Consulates and Embassies who have been facing difficulties in managing all request, as well as on multiple platforms and channels, causing a problem of information fact-checking; and trafficking in human beings and exploitation.

The solutions provided were multiples and included:

First line responses and the engagement of the private sector

IOM Romania’s response to the mass arrivals was organized in coordination with the government as well as local authorities. In light of the almost 900,000 people who entered the country and were in need of humanitarian assistance, front line measures included information and referral to services, not only for Ukrainians but also the numerous TCNs. Data was central to have a coordinated strategy and allowed the fast organization of humanitarian corridors, AVRR measures for TCNs wishing to return to their countries of origin, as well as internal inclusion measures, such as accommodation, orientation sessions, Romanian language courses, and psychosocial support. The presence of staff on the ground in different parts of the country was crucial to ensure these activities.

The strategy adopted was oriented to extending existing partnerships to face new influx of people: the private sector was key in this regard. An example in this sense is the partnership with AirBnB, created to provide short-term accommodation to Afghan resettled refugees and then transformed in a huge agreement for providing free short-term accommodation in all countries bordering Ukraine for those fleeing the war.

Despite the fact that data confirmed that the majority of those arrived have already left, the Municipality of Bucharest has already started registering people saying they want to settle there. This will entail a remodulation of the activities so far provided for the short-term inclusion to a more medium and long-term strategy.

The exchange was key to outline some recommendations and lessons learned, starting with how multi-level and multi-stakeholder partnerships are key for integration as well as addressing crises: their existence allows to extending those who already in place to face new challenges and respond to new needs; the private sector could be also key in such partnerships.

Among those actors to be immediately involved, diaspora and migrant associations are fundamental. They are the first contact of people arriving, collectors of needs and disseminators of proper information. It is important to organize official coordination mechanisms with them.

Models of coordination should be tailored to the specific contexts: national levels shall coordinate the dialogues with all actors involved, and so municipalities and regions shall have control and be empowered as main actors, in order to guarantee due diligence and communication with the local communities, especially when it concerns private initiatives for welcoming and including vulnerable groups.

Finally, it is paramount to interlink short, medium and long-term needs and perspectives: if some needs are felt more compelling than others (i.e. accommodation), education and labour market inclusion measures should go in parallel. At the same time, a non-discriminatory approach shall be guaranteed: this will also facilitate that integration measures are streamlined for all groups and integrated in more structured reforms.